No Reviews yet Write a Review 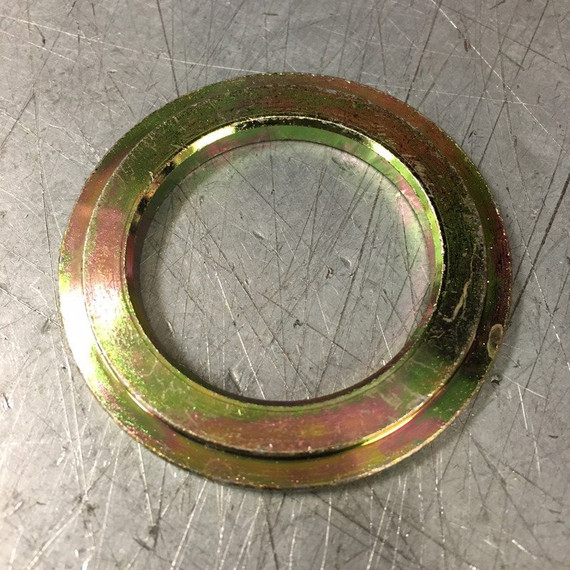 Thank you! You will be notified by email once this product is in stock.
We are unable to process your request at this time. Please try again later.

Using different thickness and diameter shim washers under the spider is something racers sometimes use for belt grip and engagement characteristics. Please see details below.

DSS-A1: This one-piece spider shim has been successfully used by many savvy clutch tuners to increase belt grip at take-off on some of the recent Cat models*. Previous (pre-2007) Arctic drive clutches had three of the .060” washers under the spider. Some 07-09* models now come with less shims (2x .060", 1 x .030"). These clutches with less shims are sensitive and sometimes engage higher even with less spring rate than earlier years. By replacing the existing washers with this one-piece shim it moves the spider out slightly, so that the flyweight is “untucked” more at first engagement for better leverage, and increases belt grip on some high torque models and is a good improvement in belt life. This shim is .180" thickness of large diameter, and .020 of small diameter. DSS-A1 = .180/.020

DSS-A2:  Some of the 2010-2015 Arctic drive clutches have a new cast spider that is a bit different geometry and only have one .060 steel shim under the spider from the factory because the spider is different. By replacing that single steel washer with this steel stepped shim would allow .085" thickness of that large diameter shim (instead of the stock .060, thus untucking weights more) and also .025 more belt side clearance. The racers that like to experiment with more belt grip may prefer this one piece shim to stacking washers of different diameters. DSS-A2 = .085/.025

*Arctic and aftermarket sources offer special tools for removing the spider from a drive clutch. There have been procedures in some model year service manuals. This is something that cannot be accomplished with normal hand tools, and only should be done for race applications and by qualified persons. If you feel you need different spider shims for a race application , etc. you should consult your dealer or a qualified performance company with the proper equipment to carry out the procedure.  models have a new / different drive clutch, spider, and shims and different spacing may be required.

DSS 2016+ with Team Clutch: Spider shims for the 2016+ Arctic Procross are a different diameter and fit.

Using different thickness and diameter shim washers under the spider is something racers sometimes use for belt grip and engagement characteristics. Using a thicker large diameter part "un-tucks" the flyweight at engagement. This increases leverage and belt grip, it does also often lower engagement. The amount varies based on the springs and flyweight profile and weight.

The small diameter part of the shim increases belt side gap and also therefore does effect the leverage position of the flyweight at the point of belt contact. Spider shims are not set in stone for the amount of change.

Answer: -There are many other variables like belts (compound and width) and flyweights and springs that mix into the effect. This is a tuning part that racers and experienced tuners test with and use to determine which one is best for their purpose at hand. Engagement requirements, belt grip for hp levels, and applications like drag racing/traction are among things to be considered. Special tools and experienced shop personnel are required for installation. With a part like this you are either using it at the request of a pro performance shop for a specific package, or doing testing on your own.

The following spider shims are for the 2016+ Arctic Procross models with Team primary clutch. The large diameter step is the first thickness listed

To most locations on orders over $99.